Running into the Arms of Great Mother, part 1 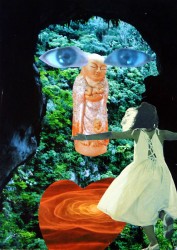 An ounce of mother is worth a pound of clergy.  ~Spanish Proverb

I thought I might open the window into my process a bit today by sharing with you my recognition that I needed a Mother in my life, and how that led me to the Sacred Feminine.

My biological mother was a physically beautiful, petite, perceptive woman with sharp eyes.  My early memories of her indicate a very young person who didn’t really know quite how to be a mother, as she was just a child herself (she was 18 when I was born).  She did what I suppose she thought she should do; her own relationship with her mother was not an easy one, and so mothering did not come so naturally.  When I try to feel her in my early life, I don’t feel much there.  There are shadows, a presence around a corner or in the other room.  It is as if there was an empty space where she should be.

I do remember some times when she would sit and color with me, which I enjoyed.  It made me feel closer to her, and I felt the presence of her own inner little girl sitting with me at the table as we chose our crayons.  There was some innocence still in her.  We were equals, two young girls at play.

As I came into my 5th year, I think I started to understand how warped things were in my family; my kindergarten picture shows a jaded and angry exterior.  But I still hoped for her to see me, to love me.  I watched her beauty and wanted to be like her, although I never was.  Her thin, dark allure matched the image that was on the tv and in the magazines.  So this was how to be a woman.

Things got crazier in my house when we moved to a rural house in the country outside of Goldsboro.  I think that’s when the drinking started to get out of hand.  Perhaps there wasn’t much else to do there.  My father would go to work each day, and my mother would put her long tresses in pigtails and work on the garden, deepening her already nut brown skin.  As she tended the squash, cucumbers and tomatoes, my sister and I would play outside with the neighbor girls, chasing their chickens or running in the tobacco field behind the house.  Perhaps the drinking was to fill a loneliness, or to assuage her fears that my father might be sleeping with other women (if my information is correct, this is indeed when he started to dally outside of the marriage).  Whatever the reason, this is when I remember having a conscious sense of losing my mother.

I was 7.  I remember having a vision of her, the sweet if unskilled mother in her pigtails, being seized by some aliens (I must have seen some sci-fi movie on the telly).  Her face is frightened; she is being taken away against her will.  She is then shrunk to the size of a Barbie doll, and flushed down the toilet in my parent’s bathroom.  In her place, an evil alien with a carefully arranged face of my mother steps in to our family. 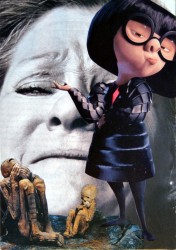 This is where I start to feel my mother is my enemy.  She was judging and critical of my body, my thoughts, my mind.  I remember feeling afraid of her barbs, stepping delicately around her anger (until I was much older and able to argue with her).  My parents would drink to excess, almost every if not every night.  When I had to get ready for school in the morning, she would sometimes still be passed out in the bed.  Sometimes this worked out in my favor; once I wore a slinky dress I’d found that was inappropriate for my age (I was 9), but made me feel like those playboy girls in my father’s magazines.  When the bus dropped me off at home that day, she was livid when she saw what I was wearing.  I don’t believe I ever wore that dress again.

Time went on; it became apparent that I was the reason for all of my mother’s anger because it was always me that got the blame.  Not one to step into her own inner wisdom, as she continued to stay with this man who sexually abused me, her and other women, she lashed out at me in her own frustration and despair.  Alternately pulling the “I’m the mother, I don’t owe you an explanation” with crying desperately and asking me for advice (“Licia, You’re so wise), I was a very confused adult child.  Needless to say, all of the surviving I did until I left home to go to school got in the way of cultivating peace within myself, and recognition of my own inner feminine.

Years of therapy, inner work and education helped me to see that what happened to me as a child was not my fault, that there were familial patterns my mother played out, and for whatever reasons, she did not have the strength that I had to break those cycles and claim her life as her own.  Years before I had children, I decided that I would choose not to have any rather than pass on the sickness that was passed on to me.  Being awake in the face of folks who don’t want to be is a hard choice; there are consequences, such as being rejected and losing folks you very much want to have in your life.  To this day, she cannot go there with me.