Running into the Arms of Great Mother, part 3

While I was unmistakably being drawn ever deeper into a mystery that seemed to reside within my own being, my prickly mental self still fought the concept of the goddess.

This is where my inner “immature masculine” had been holding court all of these years since I’d had babies and devoted time to the feminine side of me.  When I say “immature masculine”, I mean a quality of energy within me that feels like an adolescent boy, still growing into his paws; but subject to the spikes of testosterone along with not having the wisdom of age and experience, this boy has an uneasy relationship with authentic power and right action in the world.  He pushes and forces because he does not understand yet that finesse is sometimes required to get where you want to go, that there is subtlety and nuance that makes slowing down worth doing. He gets angry and dumb in his pointless rage because anger feels like power.  He wants control, to make the plan, to be in charge.  He argues for the sake of arguing; he thinks it is a demonstration of his rightness, and therefore dominance.  When a boy grows up in a supportive environment and wisely learns the lessons of life, this immaturity gives way to a beautiful, mature masculine that is a true wonder to behold.

My intellectual mind was the last hold out, and this is where my inner immature masculine had made his final stand (think Geronimo fiercely defending his last stronghold in the mountains of Arizona).  A natural part of motherhood is the loss of some mental acuity due to the brain being overwhelmed with mothering hormones, resulting in a (hopefully) softer, nicer, more maternal mommy.  And of course my body won; I couldn’t prevent the slipping into the agreeable pink and light blue cloud of baby bliss.  But I grieved for the fact that I’d lost my edge, that I couldn’t think as quickly, retrieve words or names with lightning speed, debate with as sharp a tongue.  In resistance, my mind dismissed the idea of Goddess, similar to God, as so much wishful thinking.

But when I learned that the archetypal energies of Great Mother/Sacred Feminine and Great Father/Divine Masculine were qualities of energy (ala Jung and Campbell and Pinkola Estes) that existed in the collective consciousness since the beginning of time and in the energetic structure of the universe, my mind could grasp that.  Suddenly I gave myself permission to begin to know these concepts of Sacred Feminine and Divine Masculine, and my mind let go and allowed me to flow with what my spirit had already been bringing me to.

I began with looking at what the term “Sacred Feminine” meant.  I read and researched texts from all over the world.  Multi-cultural resources showed me that “Mother” and “Goddess” and “Feminine” were terms that were sometimes used interchangeably, but also had a multitude of faces, or qualities.   I uncovered over 200 names of goddesses in multiple cultures and eras of time, each with specific qualities for which she was respected and called upon.  I could connect with these faces of the feminine, no matter what era or culture; there was something about each face that could teach me, assist me, cause me to feel more alive in the world.  I could seek these feminine archetypes within myself, bring them to the light of my consciousness, and successfully integrate them.

Some of my experience in working with specific names or faces of the Sacred Feminine have been utterly mind-blowing.  Working with a Mother goddess left me weeping in her arms as She scooped me up, feeling so grandly mothered for the first time in my conscious awareness.  Working with a particular feminine face that embodies righteous anger cleared the path within me to access and express and begin to heal my own inner rage.  Working with a goddess embodying creative power unleashed a river of creative energy within me that had been blocked behind a dam of self hatred and negation.  Working with an aspect of the Sacred Feminine that advocates sensuality and sexuality has blown off the puritanical doors that shut off my healthy sexual expression.  Working with a face of Her that brought love of the body has opened up a new relationship with my physical vessel and all of its workings, and an awareness that it is precious, a treasure, sacred.  There is so much goodness here to be had. 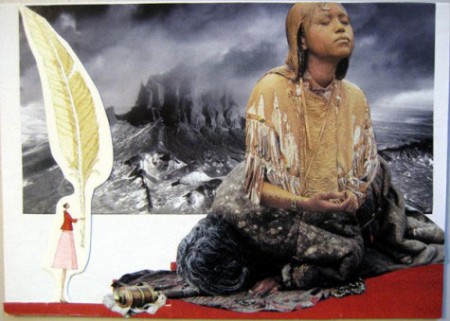 Things have happened which I have no explanation for.  I have felt and experienced revelations within my own mind and body and spirit that were undeniably resulting from my desire and choice to connect with this archetypal energy.  It was as if I was opening doors in myself that had been closed for a long time; ancient information lay behind those doors which was mine to inherit all along.

The greatest gifts that I have received from this decision in my life to consciously connect to and embody the Sacred Feminine through Her myriad faces is that in doing so I am coming into great peace and acceptance of myself, which leads me into providing the same for others; I feel permission to be in this world, and an important part of existence.  I am okay.  In Her, I am finding peace, healing, love.  And claiming Her in myself, I can bring Her gifts to the parts of myself that have been crying for Her for so long, and then, to the world.

If you are interested in learning how I successfully work with the Sacred Feminine in order to integrate Her into your own life, please join me for my experiential “Faces of Her” tele-class, starting February 18th 2010.