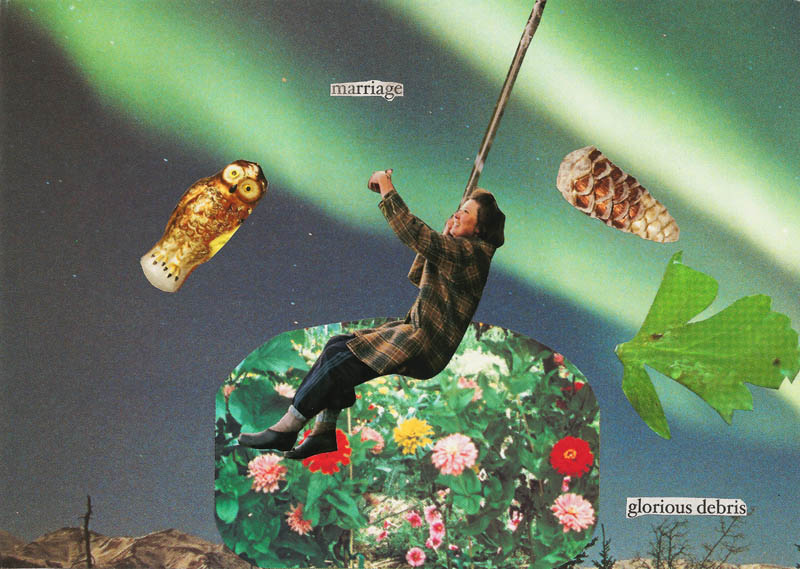 I’ve been making intentional collages for over 20 years.  (Collage, of course, is an art technique named from the French, in which one brings together disparate parts to create something new.)  I did as a kid, but I started in earnest in my first year teaching art in the Atlanta public schools.  Maybe it was because the materials are easily found for free, like many of the art supplies I had to hunt for my students.  I was a fantastic scrounger!

My collaging in earnest began when I was in an art therapy group run by the great Elizabeth Rucker, then-president of the Georgia Art Therapy Association, where we were encouraged to choose images “that felt right” to include in our pieces.  The intent of these collages was to bridge the soul and the earthly life with all of its hurts, and to invite healing.

This really spoke to me, and I continue to this day to give voice to my subconscious through the images that speak to me.   I credit that art therapy group with helping me understand and embody the connection between art and healing.  Sometimes my collages have predicted my future; other times, they were a kind of soul retrieval, providing healing for parts of myself that I had disenfranchised over my life.  Always, it has been profoundly powerful work.

Literature, symbolism and psychology were my other loves besides art and writing, and so it made some sense that I would eventually weave all of these things together into a whole-brain expression to offer to others.

Spirit wove itself into my collage-making when I learned how to dowse from an elderly woman in the Blue Ridge Mountains.  She taught me to use a pendulum, which acts as a sort of translator, a way to ask yes/no questions and confirm my intuition.  I learned through this wonderful gift that sometimes what I thought was my intuition wasn’t, and have spent 13 years working to hone my skills in that department.  I know now the subtle difference when it is my preference or my mind masking itself as intuition; I learned this through the use of the pendulum as an objective marker.

Later, I learned to utilize the pendulum to ask for messages through my collages; which images would help me understand a situation?  I would be shown images to choose through my vast stash, then told where to put them.  The relationships between the images are very important; are they touching?  Are they on the left, right or center of the collage?  Are they parallel, diagonal, oppositional, in alignment?

Sometimes I would even ask for guidance and would be told to pull out my collage materials, and my angelic helpers would guide me to make a collage that gave me a message or a warning.  It has been the most helpful and supportive spiritual practice.

I was guided in May 2009 to begin the collage you see above, entitled “Glorious Debris”, when I was in the midst of my sabbatical from my work as a spiritual counselor and energy reader.  I was despairing about my future, very much feeling my midlife crisis (rebirth) and wondering what I could do to move forward authentically into the latter half of my life.  What was my future?  I so deeply want to contribute in supportive ways to the Whole.

Unlike most of my collages, which are completed in one sitting, this one has been on-going as I have lived through my midlife, a bit at a time.  I’ve been guided to add to it three times since I began it, and is not complete (I’m told I will be adding something to it this week.)

It started with four elements:

I dowsed the images, and I was guided about where to place them on the collage.  Then, the fun part….what do they mean?  Images sometimes have universal meanings, but I have found that they also have meanings that are particular to that person, so I like to phrase my question like, “What is important about this image for me (or X client?)”

Here is what I got for the first four elements of my midlife collage:

The collage, even with just the first 4 elements on it, gave me some hope that my midlife time was going to be fruitful and have a happy ending (for those who have not gone through it, it is quite a ride!)

Over the months, I sat with these four symbols, curious when the rest would be revealed.  And then, the story continued in December of 2009, when I was guided to add a significant symbol to the back of the collage, as if it was the underlying message of the entire thing.