Return to the Whole (resistance is futile…)

By Licia Berry  Originally published in August 2007 on www.liciaberry.com

“Then as it was, then again it will be, and though the course will change sometimes, rivers always reach the sea.”   – Led Zeppelin 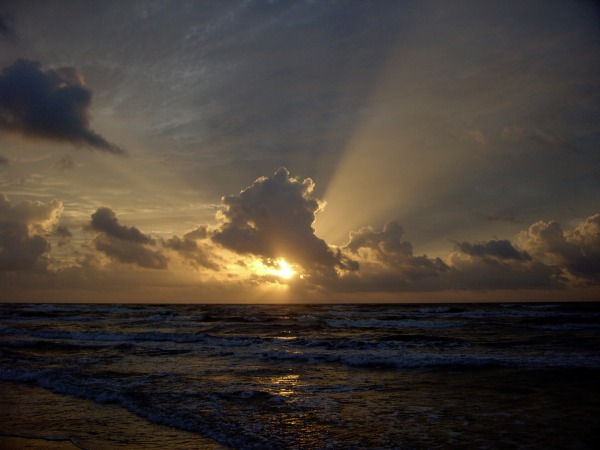 The vision came to me during the wild hurricane summer of 2003.  My family was volunteering at Padre Island National Seashore on the beautiful (but hot and muggy) Texas Gulf Coast; southern Texas is not the place I would have selected to spend the summer, but Spirit sent us there while we were on our journey to reclaim the heart of our family.

I was miserable; I tend to prefer temperate to cool and dry climates.  On Padre, every morning it was already 95 degrees and 95 percent humidity by 9 a.m.  By noon it was intolerable to be outside, so we would retreat to the air conditioned interior of our RV.  The kids were going nuts as they did not enjoy the heat and humidity either; while I did my best to keep them occupied with home schooling, art , and game activities, they were intolerably bored being indoors.  With the beach at our doorstep, it was a kind of cruel torture to be forced inside by the soggy yet searing white heat.

The climate was but a small part of my discontent.  I was very uncomfortable in my body and mind and spirit; it was as if I were one of the many massasauga rattlesnakes that inhabited the dunes, outgrowing and preparing to shed its skin.  I felt itchy, restless, irritated, and moody.  I felt trapped inside; I was coming up against myself.  I was growing past the walls I had made inside, constructed of my beliefs, fears, and attachments.  I was indeed growing beyond my present energetic capacity.

One afternoon, utterly depressed and at my wits end, I went into a self-directed healing/fact finding session.  I wanted answers and I wanted to feel better.  I was desperate to understand why I felt so awful and how I could successfully navigate through whatever was happening so I could reach the other side of it happy and whole.  I lay down on our bed in the back of the RV and opened a space to work with my angelic helpers, describing my symptoms and the way I felt, and asked for help, not only to feel better but to know what was going on.  I gave them permission to partner in work with me towards these ends.

Immediately, I felt my energy change; for me, when I feel the presence of a powerful high vibration in my field, it feels like a sort of slight compression or pressure, as if my energy field is a balloon and the balloon is being held under water.  It is subtle, but with the years of training and experience that I have, I notice it immediately.  I felt very soft waves of energy moving over and through me, and layers of energy lifting off.  I was lulled into a half-awake state, a place between waking and sleep, where I frequently receive much information in the form of visions.  I was then given a context for what was happening to me.

What I saw was a huge energy ball, like a great sun, but larger in scope than our immediate sun, suspended in the middle of space.  The feeling that I was given was that this was a “central” location, and the Source from which everything emanated.  I was marveling at the sheer size and presence of this giant energy ball, when I looked a little closer and noticed some activity in the space all around this giant sun.  I zoomed in in my inner vision and saw trillions of little objects moving through space, very slowly but consistently, towards the Source.  They were all around this energy ball, in all directions, steadily gravitating towards it.  I zoomed in a little closer and saw that each of the little objects was a different shape and color; there were some that were squares, some that were circles, some that were polygons, etc.  Interesting!  Then, I zoomed in even closer to look at one shape in particular.  It was a little triangle in my favorite shade of red.

I watched with interest this little red triangle, and observed it as it moved slowly towards Source with all of the other objects.  It was traveling along, in alignment with all the others, when something amazing happened.  The little red triangle shook, twisting and turning and doubling over, as if it was trying not to go where all the other objects were going.  It reminded me of the way a fish that has been caught will struggle and flop about, trying to escape its fate on the hook.  The red triangle’s consistent speed towards the Source was not affected by its vain attempts to escape the gravitational pull of the energy ball.  It was clear from the calisthenics it was doing that this little red triangle was resisting the inevitable motion towards Source, but it seemed to have no effect, except the triangle was wearing itself out and having a less than pleasant journey to its inevitable destination.

I got it in that moment.  I was the red triangle.

As I watched this determined little red triangle trying to make its own way, trying to declare its independence and its own path, I felt a wave of compassion.  All of my life I had stubbornly persisted in choosing the road less traveled, thinking thoughts that no one else could understand, separating myself from the herd.  I had explored the fringe of “normal culture”.  I had taken pride in being my own person, choosing not to “belong” to any particular religion, spiritual tradition, clique or group.  Being “part of the Whole” meant losing my solo identity.  I mistrusted the “whole” because it seemed to me the whole world was a mess and I didn’t want any part of it.  Over the years, I had created an internal structure, like the framing of a house, within which I could justify my mistrust and my lone-wolf stance.  And now, I was being called home to my Source, to return to the Whole.

I watched the triangle doing everything in its power NOT to return home.  It was painfully obvious that it’s struggle was not making a dent in its steady progress towards Source.  The only thing that was being accomplished by its grunts and groans was that it was making the journey a painful one rather than a pleasant one.  And thus, the answer came to me about why I was so unhappy and uncomfortable.

You are no doubt familiar with the concept of the expansion and contraction of the universe; this is a recent scientific awareness, corroborated by the ancient spiritual understandings of thousands of years ago.  The Out Breath of Source, explained scientifically as The Big Bang, is a commonly accepted model.  It is also accepted scientifically that there would eventually be a contraction of pockets of the universe into itself, or the In Breath of Source.

What is occurring right now on our planet and in our neck of the omni-verse is the In Breath.  We are being called home.  Now, this does not necessarily mean that everything in our known solar system will fly back into a black hole and become the size of a ping pong ball by 5 years.  What it does mean is that the energy flow of the outward motion away from Source is slowing, and the energy flow back to Source is beginning.

We have seen so many influxes of high vibrational energy in these last 7 years, and with the great tsunami of unconditional love that engulfed us on Summer Solstice of 2007, the vibration of the planet has never been higher.  We are steadily being prepared for our return home as our planetary, physical bodies are being subjected to the perpetual beating of the universal heart of Source.  Our individual vibrations are dancing with the continuous lapping of the high vibration of unconditional love of Source; we cannot help but be affected by it.  At a larger level, we understand and cooperate with this calling home.  But at a 3-D, egoic level, we don’t understand and we resist, creating a painful journey indeed.  We feel fear, we feel anxiety, we feel grief and anger, we constrict and try to keep our small selves safe, not realizing that only by complete surrender to this great love are we ever utterly safe.

July and August of this year are more of the same; we are in the midst of a continuous influx of high vibration from Prime Source, and the quality of the energy is akin to purifying fires that just won’t go out.  Old, outdated parts of ourselves come to the surface for examination, and then die a natural and honorable death, if we allow them, yielding to the larger fires of love.  Aspects of ourselves that we have splintered off in our attempts to survive in a harsh and frightening world are calling out to us to come home to our heart fire.  Will you leave them out in the cold?

Once I understood the vision I was given of my return to Source, I felt such a wave of compassion for myself and my oh-so-human attempts to control.  Only someone who is very afraid and who doesn’t have a sense of the big picture would try to resist something that is clearly so good for one!  So I chose to have sympathy for those parts of myself that were stubbornly clinging to a limited way of being in the world in an attempt to stay safe.  I chose to be kind to that scared inner child, to that tough inner critic, and that inner doubting Thomasina.  I saw myself as the universe, with the giant energy ball as my own immense heart, and I felt myself extend my arms in a colossal bear hug and call all MY parts home.  Then I saw them all, the ones who had been hiding in the dark corners of my psyche, the ones who has been taunting me from the edges of my consciousness, I saw them all drop their pretences with great relief and run home to my heart.  As I closed my arms around them, I cried some joyful tears and set my resolve.  I said, “I joyfully choose to allow and cooperate with the return home, and to align in the unconditional love of Prime Source and my highest happiness.”  I chose to surrender.