A Good Life, a Good Death 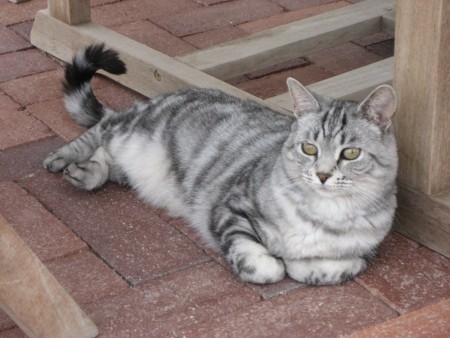 I returned from Tucson Arizona last week; it was a trip to see my adoptive parents, to make plans about an exciting east/west business venture, and to attend the End of Life Conference.  It was an eventful nine days packed with insights and AHAs.

No coincidence, of course.  The mysteries of birth, death, life and nature are inherently understood by the feminine principle, and in the bodies of women which live these mysteries on a regular basis.  The Great Mystery of All Things is accessed by women and men who are open to the other worlds through the feminine.  The feminine is the bridge to the vast unknowable.

The years spent in Colorado during our family pilgrimage were the years I emerged into profound understanding of and interaction with the Divine Feminine.  Deep, blissful awe and gratitude were frequent states, as well as despair and puzzlement as I attempted to wrap my brain around the mysteries I was privy to.  My body felt the truth way before my intellect.  This in itself is a lesson.

Like the Great Mystery, death is beyond our control.  It is the natural end of a cycle, the closing of a door that was opened at conception.  It is a mechanism of the intelligence that is way smarter than you or I, the intelligence inherent in Nature and the universe.  Death is the bridge to another realm. 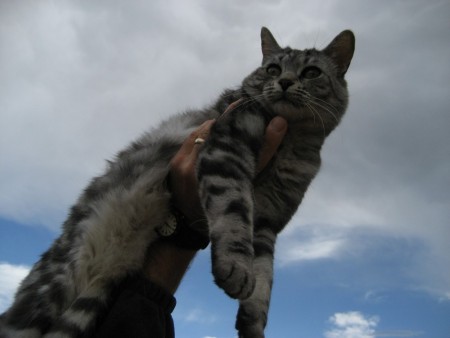 When I returned to our home from my southwest trip, our cat Tink began her descent into the death process.  Not entirely unexpected as she has been living with heart disease for a few years, the exact timing of the initiation of her death process was astonishing since I’d just attended the End of Life Conference.  I’d come away from that event more determined to honor the natural end of life process, and here was my opportunity.

Usually cats are solitary creatures at the time of their death, slinking away to release their body under a bush somewhere; but Tink called out to us as she began the process, atypically inviting us to be part of her death.  I noticed my immediate discomfort with the contractions of her body as her life force disengaged from the molecules of her physical structure.  Slow and seemingly painful, with each convulsion she was a little less present.  She seemed surprised at the end of each one, as if she went somewhere else briefly and did not expect to return.  I felt panicked at her apparent suffering until I remembered the contractions of birth, the gentle then violent process of separating the life force of a new baby from its mother.  She was being born out of her current existence into a new one.

The entire process went on for three days.  She rested peacefully for many hours between her delivery pangs, when I held her and sang lullabies that I used to sing to my children (“Golden Slumber” and “All the Pretty Horses”).  In her final hours, she spoke in a small, croaky voice to each of us in our family about her feelings; all accounts were settled and review of her life was accomplished.  I was present to witness her as she spoke to each of us, and felt her unwinding with each unburdening of her heart.  Cats have feelings, and it has never been more apparent to me. 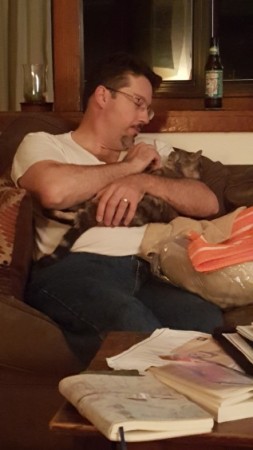 Our family spoke several times during the process about whether to assist her, to move her death along more quickly.  Each time, we came to the conclusion that it didn’t feel right to push her timeline, that this was her death and we didn’t want to steal it from her.  We felt that she was showing us something important.  She has been a teacher and a member of our family; coming to us in a pivotal time when we needed some glue to hold us together, she was a focal point during our family’s healing (on our journey in 2005, she came in answer to a prayer for “a smart, affectionate, sweet cat that we weren’t allergic to.”  A little wild desert kitten came around the back patio 2 days later, as if to say, “You rang?”  She has been teaching us about love ever since.)

And show us something she has.  Her life as our Immaculate Kitty (she never went into heat, and we could find no surgery marks) brought us lessons in acceptance, unconditional love, and mirroring when we were resistant to those.  As she exited life, she showed us a conscious awareness of her death and the need to make peace when it was time.  Her death has been a “good death”, a phrase used frequently at the End of Life conference.  A good life, and a good death are what we can have if we choose.  Being in observance of the mystery of this universe, we can allow the rightness of natural death to unfold as it should, and learn a greater appreciation for life at its feet. 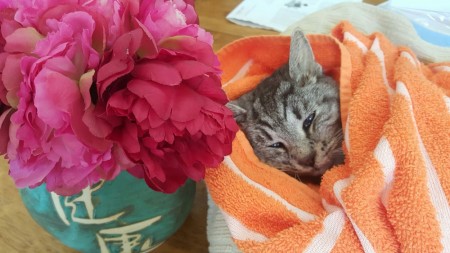 You can learn more about our 7 year family pilgrimage, the reclamation of the feminine, and a woman’s journey to remember her true power here:

In my book, I AM Her Daughter